– We are looking for happiness everywhere, but it lies in the one and only place, sleeping deep inside our heart. And it is up to us whether to wake it up or not.

This story began many years ago.

The heavy sun was burning out the surroundings. The eternal city was melting from the heat. The tires of an old yellow car were rustling lazily on the scorching asphalt, raising light clouds of dust. It is not easy to be a taxi driver when you are only twenty-one years old and your life runs in circles around the Colosseum. When there is hot summer, love, and idleness around you, couples in love are sitting on the steps in the deep shadow of ancient cathedrals, refined signores and signorinas are drinking another cup of coffee, and fat pigeons are trying to bathe in the fountains. And you have to earn your living, even if you are a descendant of a noble family. Luciano, the son of a minor count who went broke, abruptly turned the steering wheel to the left so that his taxi could swerve around the dog that was sprawling right on the road in the summer dust. By the age of twenty-one, Luciano had: a yellow taxi, dark unruly hair, a title of count, and a younger sister in his care. What he did not have was money. Taxi was an involuntary measure that allowed him to have dinner every day, pay the rent and for his sister’s education. But Luciano was not complaining about life, he did like the sound of the worn tires, the smell of the leather upholstery, the speed, and most importantly, he liked constantly meeting new people.

“It’s so hot,” Luciano wiped his forehead and envied the dog that was still resting on the road in the shadow of a tree. “When is the rain finally going to start?”

The clouds were rolling in, but none of them seemed to be in a hurry to pour the rain down.

A new passenger. A girl in a billowing sundress the colour of the sun and his taxi. So very young.

No sooner had she jumped into the car and shut the door, than the first raindrops fell onto the windscreen; then the pattering grew stronger, and suddenly there was a clear powerful rain showering down from the sky with a loud noise, creating a wall that separated those two from the rest of the world. The girl stuck her hand out of the window under the heavy jets of rain, turned to Luciano excitedly and simply said with a bright smile shining on her face,

No wonder it started to rain. The girl herself looked like a mermaid, as if her natural habitat was the sea and she could bring about rain at will, with a mere flick of the wrist. Green eyes and waves of fair hair shimmering in shades of sliver and moonlight. And she was, despite the heat, pure and cool, like a marble statue. Like an illusion.

When you are young, love always happens suddenly and without preamble. Lisa was a student at the Leningrad Academy of Arts and was studying art history all over Italy. She was interested in old churches, intricately carved statues, and heavily framed paintings covered in cracks. And Luciano knew and loved the secrets and mysteries of the old towns hidden far from tourist paths. They had a lot to tell and show each other. The yellow taxi tirelessly drove them from the Uffizi Gallery in Florence to the leaning tower, and from the maiolica of Pisa back to Vatican. If early in the morning they were standing pensively in front of Pietà, then in the evening they were running over the Ponte Vecchio laughing and looking over the antiquarian ornaments. Sometimes, all concerns forgotten, they would go to a small town on the coast where they would swim, chat and sit for a long time looking at the evening sea and the sunset as it was floating off. And late in the evening, relaxed and hungry, they would stroll hand in hand towards the inviting light of a street café, closer to the heat of pizzas and the cool of Prosecco. 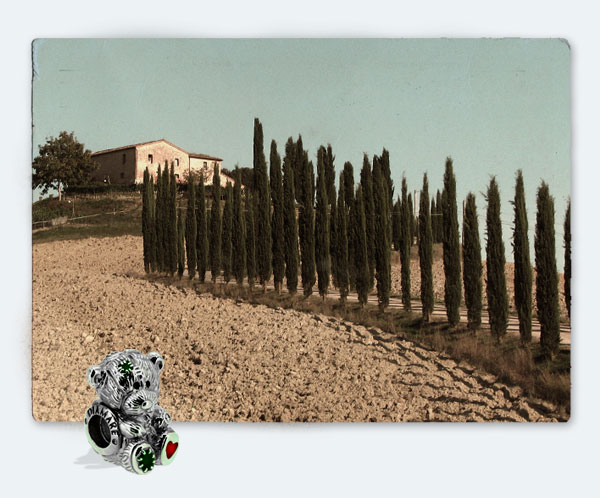 Lisa adored Italy, was obsessed with the Renaissance, and using her non-perfect Italian she would tell Luciano stories about the lovely Simonetta, the prototype of Venus and Flora, about her beloved Giuliano and his brother Lorenzo the Magnificent; and in her stories these long forgotten shadows would come alive and become more real than the living people.

Like all lovers, they had their rituals. Every time they got outside the city, they would stop the car by the road, go into the thick wild grass and braid green bracelets with flowers for each other. They would wander around with their heads down in search of the lucky four-leaf clover. The meadow was filled with buzzing of heavy bumblebees, cheerful chirping of grasshoppers, and the luck seemed to be right within their grasp, but the clover stubbornly hid its magic from them. Soon the yellow taxi would carry away its passengers connected by the green bracelets of eternal love.

Everything ends. That magical summer was also coming to an end, Lisa’s departure that they had been trying to forget was looming large. The green foothills flashed by as blurred stripes on their farewell trip from Florence to Rome. True to their ritual, they stopped the car, then, abruptly realizing the imminence of their parting, they started plodding their way in silence across the carpet of clover. All of a sudden, Lisa bent down quickly and threw her hand up in triumph holding a green clover with four leaves in it.

“I’ve found it!” she cried, “and I’m going to make a wish! I want, I want…” The buzzing meadow suddenly fell silent, it seemed that even the fat bumblebees stood still and strained their ears. She raised her open palm with the clover in the air and shouted into the boundless blue sky, “I want him to be always happy!”

Clutching the green talisman tightly in her hand, she came up to him and looked into his face with her sorrowful eyes of a mermaid, the sea splashing in them. Or it was tears. And she repeated,

On that day, she has easily gave him her happiness, as she had given him her heart before, as she had created this summer for him, weaving it from the sun, youth, and love. 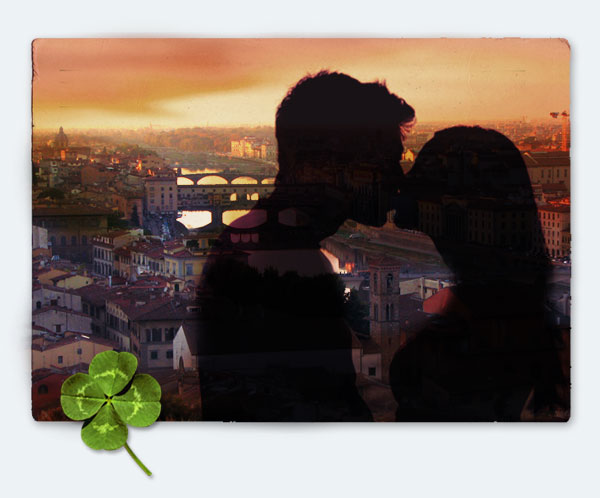 Tomorrow was the day of departure. Luciano came rushing to her in the early hours of the morning so that they could spend the remaining time together. For the last time, the yellow taxi was sadly waiting by the hotel for their last drive. But the receptionist with a mustache just shrugged his shoulders helplessly, apologizing. She was gone. She had left at night in a hurry, due to some reason she had had to leave earlier. She seemed to have made a mistake with the tickets and was being late for her flight. He did not quite catch, because her Italian was farther from perfect than it normally was due to her nervousness, he could hardly understand what she was saying, and what difference it makes, really. Left anything? Yes, it seems she has left something for signore Luciano. The mustached receptionist drew a white rectangular out of the desk and cast a curious glance at the strange guest.

Luciano slowly took the proffered envelope. A slightly faded four-leaf clover fell onto his palm together with a note covered by hurried curling lines: “We are looking for happiness everywhere, but it lies in the one and only place, sleeping deep inside our heart. And it is up to us whether to wake it up or not. I want you to be happy so much. And I will always love you.”

He knew neither her address, nor her phone number, the connection between the two countries was illusive and the not-yet-invented Internet could not help them in any way. The fine thread of the Italian summer was torn.

But her wish was strangely granted. Either the magic four-leaf clover did the trick, or the memory of the magical summer and the first tender requited love.

Luciano was happy all his life.

The story became known to us thanks to one occasion. When several years ago in the house belonging to Luciano – a handsome, impressive middle-aged man; a happy head of the family of the wife Maria, the son Stefano, the daughter Lisa, the dachshund Tara, and the cat Bianca; an owner of a small Murano glass factory – the assembled guests were discussing a joint production of jewelry, one of them opened an old album with reproductions of the Renaissance paintings, and suddenly a dried four-leaf clover fell out of it.

The person who opened the album and was holding the lucky clover, due to a strange coincidence, was a friend from Russia. And right now, clutching the dried clover in his hand, he does not know yet that he will soon hear a story that will inspire him to set up a jewelry business, and that the lucky four-leaf clover will become the company’s symbol and talisman. And in the near future he will braid plenty of silver bracelets resembling that distant interweaving of summer grass so much. And Luciano will decorate these bracelets with his Murano glass that reflects the drops of the Italian sea, sun, and his first love for a Russian girl. And that these bracelets will be sold exactly in Russia. Because they are both hoping that one day in the misty St. Petersburg this bracelet will be bought by the girl named Lisa, who has grown older but still has the same mermaid eyes… But all this will happen later.

And now, the Russian friend is twirling someone’s happiness in his fingers with a confused look and says,

“Oh, I didn’t know you were keen on collecting dried plants.”

And Luciano is smiling with a faraway look on his face and asks,